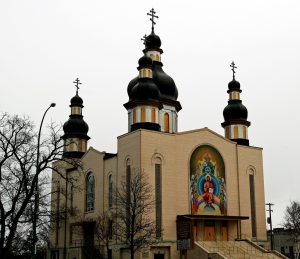 Most of the first Ukrainian settlers came to Canada from Halychyna (where they were Greek Catholics) and from Bukovyna (where they belonged to the Orthodox Church). The Halychany, settling in Canada, where visited once in awhile by Greek-Catholic priests, but the Vatican wished to attached them to the Roman-Catholic Church already in existence, which would have assimilated them. The Bukovynians arriving in North America usually incorporated themselves into the Russian Orthodox Mission, which was already in existence. Nevertheless, the Ukrainian immigrants desired to have a Church with a Ukrainian character, which would be closer to the spiritual and cultural needs of the Ukrainian people, and this led to the formation of the Ukrainian Orthodox Church of Canada.

In July 1918 a confidential conference of disenchanted lay Catholics from Manitoba, Saskatchewan and Alberta created a Ukrainian Orthodox Brotherhood — its goal — to organize the Ukrainian Greek Orthodox Church of Canada. Although the Ukrainian settlers who took part in the organization of this Church body were not theologians, they were conscious of the canon law that a Church body cannot exist without a bishop. Thus, the brotherhood contacted Archbishop Alexander, an ethnic Ukrainian in the Russian Orthodox Mission in North America, who initially accepted to become the temporary bishop of the Ukrainian Greek Orthodox Church of Canada (U.G.O.C.C.) and to preside at its first Sobor, but later refused. The first “Sobor” took place anyway on December 28, 1918, without the presence of a bishop and led to the establishment of the first seminary in Saskatoon. The second Sobor was held on November 27, 1919, with the presence of the Antiochian Metropolitan Germanos, who accepted to lead the U.G.O.C.C. until the time it would have its own bishop. He headed the Church for five years, until 1924.

The new Church was a distinct Canadian institution, unconnected to any Ukraine-based Church. It accepted the dogma, rites and practices of Eastern Orthodoxy. It also stressed that the Church was to be conciliar in organization [sobornopravna] to the point of giving lay delegates a voice and a vote in administrative matters at the Church’s General Councils (“Sobors”) and on the main administrative body of the Church, the Consistory — upon which sit the Church’s Synod of Bishops, nine clergy and nine laity. The Metropolitan and his Synod of Bishops retain exclusive authority in all matters of Orthodox belief and practice.

In 1924, Archbishop John (Theodorovich) arrived in the U.S.A. from the Ukrainian Autocephalous Orthodox Church, to lead the Ukrainian Orthodox Church in U.S.A. Knowing of the presence of a Ukrainian bishop on the American continent, the fourth Sobor of the U.G.O.C.C., held on July 16-17, 1924, decided to invite Archbishop John to become the ruling bishop of the U.G.O.C.C He accepted, and thus began visiting Canada during the summers. During his absence in winter, when he was in the U.S.A., his administrative functions were carried out by the priest-administrator [the іChair of the PresidiumІ] at the Office of the Consistory – Father Semen Sawchuk. . With 14 priests, the U.O.C.C. insisted on retaining its administrative autonomy under Rev. S. Sawchuk.

The Ukrainian Self-Reliance League, formed in 1927, became an effective lay arm for the U.O.C.C. and boosted its material resources. By the end of 1928 the Church had approximately 64,000 followers, organized in 152 communities, served by 21 priests. It was strongest in Saskatchewan (81 congregations in 1940), Alberta (55 congregations),and Manitoba (53 congregations). In due time, the Church opened a theological school — St. Andrew’s College, in Winnipeg, in 1946.

In 1951 by the time an extraordinary Sobor was called, the Consistory had found four candidates for the office of a local ruling bishop. They were all canonically elected and ordained by the Holy Synod of the Warsaw Metropolitanate (Autocephanous Orthodox Church in Poland). Of these candidates, three came to Canada: the Metropolitan of Kholm and Pidliasha Ilarion (Ohienko), who fled with his flock during the war, and came to Canada in 1947 at the invitation of St. Mary the Protectress Cathedral (Sobor) in Winnipeg; Archbishop Michael (Khoroshy), who came to Canada in 1951 at the invitation of the Consistory; and Bishop Platon (Artemiuk) who came to Canada in 1951 with the blessing of Metropolitan Polikarp (Sikorsky), but who prematurely fell asleep in the Lord. The extraordinary Sobor decided to follow the canonical system of a metropolia to administer the U.G.O.C.C., creating thus a metropolia with three eparchies. Metropolitan Ilarion (Ohienko) was chosen Metropolitan of Winnipeg and all Canada, and Archbishop Michael (Khoroshy) became Archbishop of Toronto and the Eastern Eparchy.

After twenty-one years of zealous archpastoral ministry, Metropolitan Ilarion fell alseep in the Lord on March 29, 1972. His passing was felt as a great loss for the U.O.C.C. Archbishop Michael was chosen to replace him, and he was at the head of the Metropolitanate until 1975. when he resigned from the office of Primate. Then Archbishop Andrew became the Primate of the U.G.O.C.C. He remained its Metropolitan for ten years, until his blessed repose on February 2, 1985. During the time of his administration new bishops were ordained: Bishop Nicholas (Debryn) in 1975;57 Bishop Wasyly (Fedak) on July 16, 1978, who became the Primate of the U.O.C.C. after the death of Metropolitan Andrew in 1985,58 and Bishop John (Stinka) on November 27, 1983. During the term of office of His Beatitude, Metropolitan Wasyly, Archmandrite Yurij (Kalistchuk) was ordained Bishop of Saskatoon on October 22, 1989.

Historically, UOCC membership has been relatively stable, and has ranged between 20 and 25 percent of the total Ukrainian Canadian population. In 1989 the Church’s estimated membership was 128,000 in 290 congregations with 99 clergy.

Fulfilling the desires and intentions of the ever-memorable Metropolitan Ilarion, Metropolitan Wasyly, assisted by the Consistory, and with the help of God, concluded the canonical ordering of the U.O.C.C. After a few visits and discussions with the Ecumenical Patriarchate, the U.O.C.C. was received into the Ecumenical Patriarchate in 1990, at the time of His Holiness, the Ecumenical Patriarch Dimitrios, and thus normalized its relations with the other Orthodox Churches. This made it a duly recognized member of the Orthodox family which consists of four ancient Patriarchates (Constantinople, Jerusalem, Alexandria and Antioch) and over a dozen other autocephalous (self-headed) and autonomous Churches, some also headed by Patriarchs. The Primates of these Churches manifest their unity by commemorating each other during Liturgy and Divine Liturgy together on special solemn occasions.

The quintennial Councils or Sobors are the highest decision-making bodies of the U.O.C.C. Executive duties are shared between the Council of Bishops and the Consistory based in Winnipeg, with elected clerical and lay representatives from each diocese. The Ukrainian Self-Reliance League, with its component organizations, continues to play a significant role in Church affairs at the local and national levels. In addition to St. Andrew’s College and its Faculty of Theology, the Church is affiliated with a number of student residences: the Mohyla Ukrainian Institute in Saskatoon, St. John’s Institute in Edmonton, and St. Volodymyr Institute in Toronto. Its official publication since 1924 has been the “Visnyk” / “The Herald” newspaper.

The Ukrainian Orthodox Church of Canada is an important religious element in Canada, where Ukrainian culture and heritage are fused with the Orthodox Christian faith to form a living and vibrant tradition in Canada

Based on information by Hierdeacon Job Getcha and Dr. Oleh Gerus, and on Consistory records.