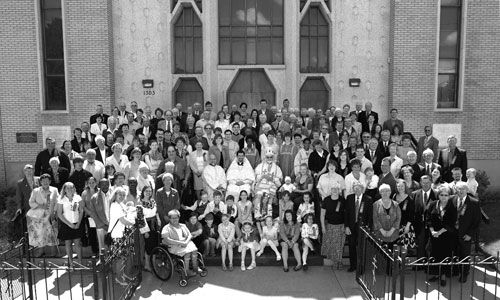 Note: The following “Pastoral Letter on Suicide” was adopted by the Standing Conference of the Canonical Orthodox Bishops in the Americas (SCOBA) at their May 23, 2007 Session held at St. Vladimir’s Seminary in Crestwood, NY. The document was prepared by the SCOBA Social and Moral Issues Commission (SMIC). The Letter offers pastoral perspectives, consistent with both Holy Tradition and current medical and psychological thought, to clergy and laity alike on this human tragedy and how best to minister to those whose lives are so deeply affected by it.

The tragedy of suicide has been a part of the human story from very early on, and it continues to affect the lives of our faithful today. As Hierarchs of the Standing Conference of Canonical Orthodox Bishops in the Americas, we are asked frequently to clarify the Church’s teachings on this critical issue. Our desire is to offer a pastoral perspective that is consistent with both the Tradition of our Orthodox Church and our improved understanding of the medical and psychological factors that might lead one to take his or her life.

The Sacredness of Life

As Orthodox Christians, we believe that life is a gift from God. The All-Holy and Life-Giving Trinity created all things and granted life to all living creatures. Out of His love, God made us, human beings, in His own divine image and likeness, entrusting us as stewards—not owners—of our lives, blessing us with the capacity of freedom, and calling us to a life of loving communion.

Our ancestors’ original rebellion against God was a misuse of freedom, which ushered in the reality of both spiritual and physical death. Throughout history, God has acted to redeem the fallen race and to restore the communion and life that had been forfeited. Indeed, our Lord Jesus Christ identifies the very purpose of His incarnation and earthly mission with the gift of life, proclaiming, “I came that they may have life, and have it abundantly” (John 10:10). Remaining faithful to the Lord’s Gospel, the Orthodox Church invites all human beings to enter into the living body of Christ, to be sustained through the life-giving sacraments, and to preserve and perpetuate both spiritual and physical life.

Suicide and the Orthodox Tradition

While a precise and unproblematic definition of “suicide” is difficult to articulate, we can say that the type of suicide here being addressed pertains to the intentional causing of one’s own physical death through a decisive act. Understood in this way, suicide is regarded generally within the Orthodox Tradition as a rejection of God’s gift of physical life, a failure of stewardship, an act of despair, and a transgression of the sixth commandment, “You shall not kill” (Exodus 20:13).

Historically, the Church was called upon to address the issue of suicide from the outset. When the Gospel was first being preached, philosophical and religious teachings prevalent in the Greco-Roman world tended both to disparage the body and to endorse suicide in circumstances of severe hardship. The Cynics, Epicureans, Stoics, and Gnostics, for example, all endorsed voluntary death for reasons consistent with each group’s broader ethical vision. The early Church’s condemnation of suicide, as reflected in the teachings of Clement of Alexandria, Lactantius, St. Augustine, and others, thus served to affirm teachings that were sharply different from those of the broader culture: the sacredness of each human being, the holiness of our bodies as Temples of the Holy Spirit, and, especially, the call for each one of us to maintain faith and hope even in the midst of extreme adversity. While these core teachings provided a Christian witness to Greco-Roman society, they also were reflected internally, to the members of the early Church, through the condemnation of all attempts to hasten one’s entry into the Kingdom by self-sought martyrdom. Clement of Alexandria, for instance, condemns both suicide and such martyrdom when he writes, “He who presents himself before the judgment-seat becomes guilty of his own death. And such is also the case with him who does not avoid persecution, but out of daring presents himself for capture. Such a person…becomes an accomplice in the crime of the persecutor” (Stromateis 4.77.1).

Notwithstanding its strong general stance against the moral permissibility of suicide, the Church, historically, has offered a balanced teaching on this issue. On the one hand, the Church has maintained the normative position described above by condemning acts of suicide and by declining to offer a funeral service and burial to suicide victims. This dimension of the Church’s teaching has underscored the sacredness of physical life and the responsibility of human beings to express proper self-love, gratitude, and hope. This dimension has also served as an intended deterrent for those suffering suicidal thoughts.

On the other hand, in her wisdom, the Church has acknowledged the complex etiology and emotionally charged character of a suicide. The corruption of human nature, brought about by the ancestral sin, carried profound implications for both the spiritual and physical dimensions of the human person. While human freedom was not annihilated in the fall, both spiritual factors, like acedia (spiritual torpor), and physical factors, like depression, can severely compromise a person’s ability to reason clearly and act freely. In regard to suicide, the Church has taken very seriously such spiritual and physical factors, and has responded pastorally by offering a funeral service and burial to suicide victims whose capacities for judgment and action were found to be significantly diminished. Thus, Canon 14 of Timothy of Alexandria states that liturgical services should be offered, “if a man having no control of himself lays violent hands on himself or hurls himself to destruction.” And the patristic interpretation of this teaching states that services should be offered when a suicide victim “is not of sound mind, whether it be as a result of a demon or of an ailment of some sort.”

Through advances in science we now have a better understanding of the relationship between suicide and depression, as well as a more accurate account of the causes of depression. Depression is an illness caused by both medical and psychological factors. It is characterized by feelings of marked worthlessness and hopelessness and is often accompanied by physical changes such as loss of appetite, weight loss, or in some cases, weight gain. Both insomnia and hypersomnia are common symptoms.

Current medical knowledge helps us to understand that all depressions are multi-factorial. Genetic, hormonal, neurochemical, environmental, and psychological contributions can combine to create a depressive picture. Furthermore, depression can present as the only expression of an underlying physical illness such as occult cancers, thyroid dysfunction, and drug reactions.

Sometimes depressions are very severe and psychotic in nature. These can be accompanied by delusions, hallucinations, and an altered sense of reality. In most instances, the depressed person is less impaired. Nonetheless, in all cases, depression is determined by non-rational psychological and physical internal events. Even an apparently rational and clear-thinking person may have his or her outlook and choices strongly affected by those non-rational internal events.

In light of the above theological and scientific reflections, it is clear that the articulation of a proper Orthodox response to the tragedy of suicide is both acutely needed and particularly challenging. We are sensitive to the difficulty of maintaining a balance between the call of every human person to responsible stewardship of his or her physical life and the call of the Church to consider how advances in medical knowledge impact Orthodox pastoral ministry. Conscious of this need for discernment, we offer the following guidelines for ministering in the wake of a suicide.

First, we must remain mindful that the primary focus of the Church and its pastoral ministry in cases where a suicide has taken place is on the living, the family and friends of the deceased. We should maintain a certain humility while remembering that the state of the suicide victim is and must remain in the hands of God. Those left behind carry a great burden – of hurt, guilt, and often shame – with the realization that their loved one has taken his or her own life. They look to the Church and, especially, to the parish family, for strength and hope regarding the deceased, and for the support and love they themselves so urgently need. In addition to their personal pastoral response, clergy should direct grief-stricken family and friends to crisis counseling resources in the area, which can complement the healing ministry of the Church.

Second, as we have studied this issue, it has become clear to us that far more cases of suicide than have previously been recognized involve spiritual and/or physiological factors that significantly compromise a person’s rationality and freedom. While not removing moral culpability from all suicide cases or changing our general stance against suicide’s moral permissibility, we affirm the deep relationship between physical and spiritual factors in human agency and we acknowledge that, in most instances, the complex web of causes contributing to a suicide lies beyond our full understanding.

Finally, because of the complexity of suicide, both in terms of determining causes and in terms of ministering to those most affected, the parish priest should always consult with his diocesan hierarch in order to discern the proper course of action, the general pastoral recommendation being that a church burial and memorial services could be granted unless there were an absence of significantly diminished capacities.

In his beautiful description of the Church as the “body of Christ,” St. Paul writes, “If one member suffers, all suffer together; if one member is honored, all rejoice together.” (1 Cor 12:26) The suicide of an Orthodox Christian is a tragedy that is suffered by the entire Church. As hierarchs of the Orthodox Church, we are acutely mindful of the need to maintain a perspective on suicide that is consistent with our identity and mission as the unified body of Christ. We believe that the perspective outlined in this statement, which reflects our common mind, accomplishes this purpose by drawing from our Holy Tradition as well as our deepened understanding of suicide’s causes.

We extend our fervent prayers for the victims of suicide and for all whose lives and faith have been shaken by the suicide of a loved one. Furthermore, as Orthodox bishops and members of SCOBA, we affirm that we will work together rigorously in order both to prevent suicides from occurring and to provide a unified pastoral response when they do, one characterized by the faith, hope, and love made possible by God, in Whom “we live and move and have our being.” (Acts 17:28)